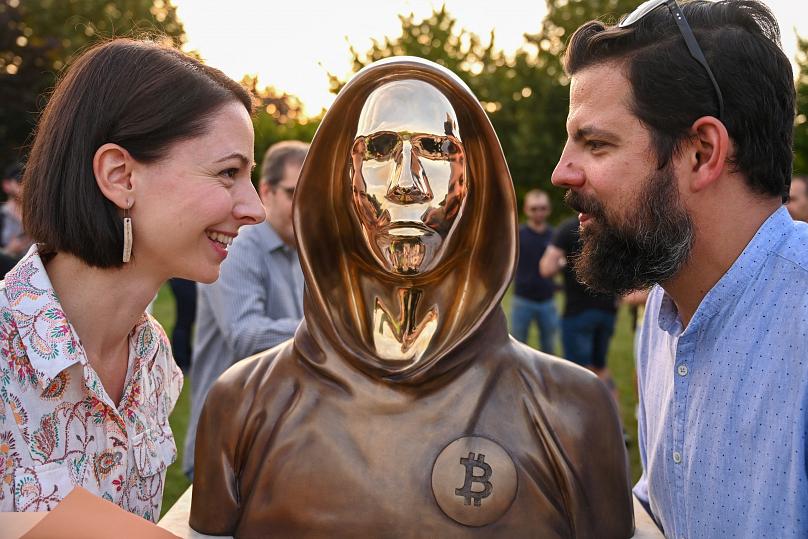 In Hungary, a bronze statue honoring Bitcoin’s anonymous founder has been unveiled. According to the statue’s builders, it is the first in the world to honor Satoshi Nakamoto, a pseudonym for the Bitcoin inventor or inventors, whose identity is unknown.

The sculpture was revealed in a technology park in Budapest, Hungary’s capital, which also houses an Apple founder Steve Jobs monument. Andras Gyorfi, a Bitcoin journalist and the project’s originator, described Satoshi as “the founding father of the entire cryptocurrency sector.”

“He is the deity of our market since he invented Bitcoin and blockchain technology.” The statue of Nakamoto has a plain face and is dressed in a bronze sweatshirt with the Bitcoin logo on it. It is also highly polished, giving it the appearance of a mirror in which visitors can see themselves.

Its designers, sculptors Reka Gergely and Tamas Gilly, intended to depict a human shape while maintaining Nakamoto’s anonymity. “It was a huge undertaking. Making a portrait sculpture of someone we don’t know exactly how they look is really tough “The Associated Press reported on Gilly’s comments.

“I hope that by using sculpture as a medium, I was able to represent the essential concept of Bitcoin, which is that it belongs to everyone and no one at the same time.”

In the aftermath of the global financial crisis, Bitcoin was founded in 2008 with the goal of circumventing existing financial institutions by providing safe technology for peer-to-peer internet transactions without the use of intermediaries such as banks.

Who or what is Nakamoto?

Nakamoto – a pseudonym that might allude to a person or group of persons of unknown gender, age, or country origin – wrote the company’s first white paper, which was published that year. According to Gyorfi, the organizers of the monument project invited Nakamoto to the unveiling in the hopes of finally learning the Bitcoin inventor’s genuine identity.

Despite the fact that the event drew hundreds of people, no one claimed responsibility for creating the cryptocurrency that has drawn tens of millions of investors and was recently adopted as legal tender in El Salvador.

The statue, according to Gyorfi, is a tribute to Nakamoto and an effort to “increase awareness about blockchain and cryptocurrency.” He raised roughly $10,000 (€8,400) in cryptocurrency donations with the help of other Hungarian Bitcoin aficionados to fund the bust’s production.

However, he explained that this had to be turned into forints, Hungary’s official currency, because “sadly, the sculptors and other service providers do not accept Bitcoin yet.”