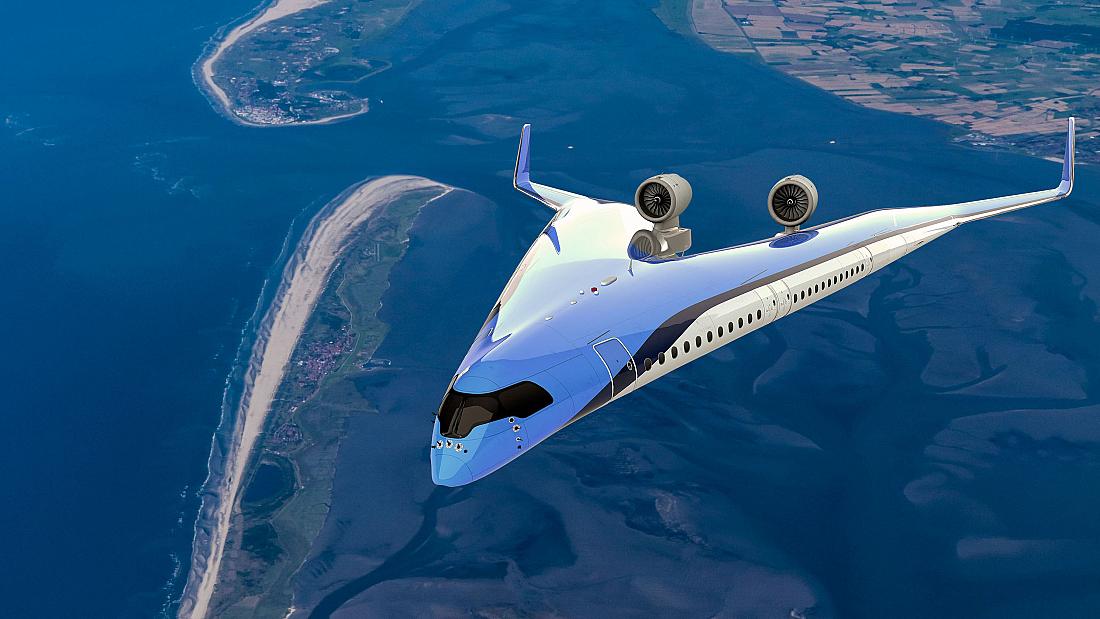 A man runs through a field while holding a V-shaped model airplanes above his head, eventually letting go and seeing it glide a few meters above the ground. This rudimentary flight test was the first step in the development of a revolutionary new aircraft that, according to its creators, might transform the way we travel by 2041.

Roelof Vos, an assistant professor at the TU Delft University’s Faculty of Aerospace Engineering, is leading a team of engineers in the development of the Flying V, an unconventional V-shaped plane that is expected to shake up aircraft design with its innovative oval-shaped cabin.

He explained, “I’m a plane designer.” “And this plane is quite lovely.” The project, which is a collaboration between KLM and Airbus, intends to make a significant contribution to green aviation. “We want to make a substantial difference in terms of cutting fuel usage, and this aircraft is designed to do so,” said Vos.

Justuce Benad, an intern at Airbus in Hamburg, came up with the idea for the Flying V by putting two fuselage barrels of an A380 plane at an angle to each other. The cargo hold is located within the wings, behind a 6.1-metre wide oval-shaped passenger compartment. The fuselages have plugs that may be readily removed to make the plane smaller.

Two doors side by side aid integration with the airport terminal, allowing for faster passenger boarding and deboarding as well as improved emergency evacuation. Vos predicts that the first prototype will be ready in 2041, but adds that there is still a lot of research and development to be done.

He mused, “The oval structure is absolutely new; how do we know it’s efficient?” “We could make the plane more efficient by making it smaller, but we don’t want it to be cramped for passengers, so we’re looking into other cabin layouts,” Vos explained.

“We don’t have a tail, so the design is straightforward, but the Flying V has to land at a very high angle, like Concorde, therefore we have the biggest landing gear ever designed for an aviation, at five meters tall and fitting inside the fuselage. There are a lot of unknown unknowns in this situation “.. The Flying V might be fueled by massive pressurized liquid hydrogen tanks, sacrificing 70% of cargo volume in the process.

Engineers from TU Delft University flew a three-metre scaled replica of the Flying V to evaluate aerodynamics during flight in the first official test flight, which was a little more advanced than a guy running in a field. Chief engineer Malcolm Brown was in charge of the plane from the ground, using a laptop.

He stated, “It’s been two years of stressful, intensive work.” “Seeing it in the air was well worth the wait.” Years of preparation culminated in the test flight, and the moment the model ascended to the air was naturally emotional. “Malcolm was emotional because the great fear was that everything will halt and crash down after two years of work,” Vos added.

The next stage for Vos and Brown is to construct a 13-metre scaled replica drone to test for handling, take-off and landing dynamics, and noise in a wind tunnel. “We need to take it to the next level and test it in a more professional setting,” Vos said.

“We want to discover people with whom we can collaborate and realize our goal. It’s a tremendously inspirational endeavor, and the best part is that there’s still so much to learn. There are a lot of things we hadn’t considered when we started the investigation, which keeps it fascinating for us “..

However, despite all the unknowns, Vos is certain of one thing. “The Flying V will completely transform how we fly,” he predicted. “Quite literally,” says the speaker.

Seoul to become the first city to enter the metaverse

Seoul to become the first city to enter the metaverse