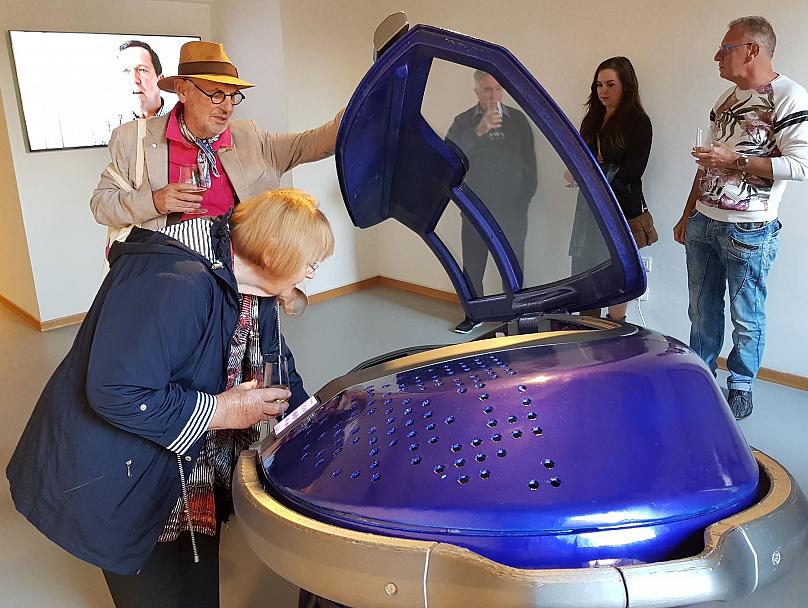 A legal evaluation of a 3D-printed “suicide capsule” has passed in Switzerland, paving the door for the technology to be used in the country’s authorized assisted suicide clinics. Dr. Philip Nitschke, the developer of the Sarco capsule, told Euronews Next that his goal was for everyone to be able to download the design and print it themselves.

In the future, Nitschke’s assisted dying advocacy group, Exit International, will be able to “demedicalize” the dying process by removing the need for medical practitioners to be engaged, he added. He told Euronews Next that an assessment commissioned by Exit International and conducted by Swiss legal academic Daniel Hürlimann verified that the Sarco did not violate any laws governing medicinal products, narcotics, dangerous chemicals, or firearms.

Hürlimann told Euronews Next via email that the review found that “assisting the suicide of a competent person by means of Sarco does not constitute a violation under the Criminal Code.” “The commissioned assessment convinced us that there were no legal difficulties that we were overlooking, and that there is no problem – from a Swiss legal standpoint – with the use of Sarco at a euthanasia clinic, or by a Swiss individual who desires to print and use the machine themselves,” Nitschke stated. The Sarco will be available to users in Switzerland early next year, according to the organization.

The only way to operate the Sarco capsule is from the inside. Users will be able to release nitrogen gas by pressing a button, blinking, or making a gesture, which will cause hypoxia and, eventually, death. According to a video featuring its designer Alexander Bannink, it also has an emergency stop button and an escape hatch. Exit International will not sell Sarco; instead, it will share the design to those who will need to 3D print it themselves, as well as collaborate with assisted suicide facilities in Switzerland.

Exit International may be able to escape legal trouble simply by providing the design in the great majority of nations where assisted suicide is still illegal. “If you manufacture anything by hand, as we usually do,” Bannink explained, “you can be held guilty because you are assisting someone in dying.” “Outside of Switzerland, legal use of a machine we built is not conceivable,” Nitschke explained.

While anybody may theoretically print the Sarco, Exit International will not distribute the blueprints to anyone under the age of 50, and access to the capsule will be controlled even after it is produced, according to the organization’s website.

Death is becoming more democratic. Nitschke has a lengthy history of pushing for the right to die, including running for political office in his own country of Australia on the issue. In 1996, he became the first medical doctor to legally perform a voluntary lethal injection, using a self-designed equipment that allowed the patient, a prostate cancer patient named Bob Dent, to deliver the medications by pressing a button on a laptop by his bedside.

“Control is the major issue,” Nitschke remarked. When assisted dying was briefly legalized in Australia’s Northern Territory from 1996 to 1997, the law still required a doctor’s consent. “This generated issues, for example, with long-married couples when one fell ill and their spouse expressed a desire to die at the same time,” Nitschke explained.

“It’s all about democratizing the process of dying. We believe that allowing all reasonable people to terminate their lives is a right, not a privilege that can be granted to the terminally sick at others’ discretion”. However, Nitschke and Exit International’s forthright approach has frightened Switzerland’s major assisted suicide participants.

A non-profit company called Dignitas told Euronews Next that it doubted the Sarco’s do-it-yourself method would be recognized in Switzerland, where non-profits and doctors have worked together for 35 years to facilitate assisted suicides. Established organizations are also familiar with Switzerland’s legislative framework for assisted dying, which requires that every death, whether voluntary or not, be submitted to the authorities for examination, according to Dignitas.

“The vast majority of the public and politicians approve of and support this practice,” the organization stated. “Given this well-established, safe, and professionally supported practice, we doubt that a technologically enhanced capsule for a self-determined end of life will find widespread acceptance and/or interest in Switzerland.”

However, according to a 2017 research by UK campaign group Dignity in Dying, following the established path may be beyond of reach for many, with the average cost of an assisted death in Switzerland for a UK citizen coming in at around €12,000.

In a recent interview with news site Swissinfo, Nitschke stated that Sarco will employ AI to assess people before allowing access to the capsule in order to completely remove outside influence from the assisted dying procedure. “The goal of our project is to create an artificial intelligence screening system that will determine a person’s mental capacity.

While assisted suicide is allowed in Switzerland, the current procedure necessitates the involvement of medical specialists who prescribe the medications and conduct psychiatric assessments. “The suggested AI evaluation to remove this medical participation is part of the Sarco project’s next stage,” Nitschke said.

Algorithmwatch, a non-profit organization that studies the influence of automated technology, has raised concerns about artificial intelligence’s possible role in Sarco. “This plainly misses the fact that technology is never neutral: it is designed, tested, deployed, and utilized by humans, and in the case of so-called Artificial Intelligence systems, it often relies on historical data,” said Angela Müller, policy and advocacy lead at Algorithmwatch.

“I believe that relying on them will undermine rather than increase our autonomy,” she told Euronews Next, “since the process by which they arrive at their conclusions will not only be a black box to us, but it may also entrench existing inequalities and biases.” It’s possible that the AI debate will remain a purely academic discussion.
Nitschke intends to release the Sarco capsule in Switzerland next year, but the necessary software will not be ready in time.

“In the early stages of Sarco use in Switzerland, we will ensure that all people who choose this option have undergone a comprehensive medical examination by Swiss doctors to eliminate any doubts about their capacity. This service is being provided with the help of Swiss psychiatrists “He expressed himself. “As the AI screening progresses, we plan to do dual testing of subjects utilizing medical services as well as the AI software screen to determine the AI program’s efficacy,” he added.